Delegations are unique experiences which offer students the opportunity to represent an association during conferences or council sessions organised by core international organisations. Those selected are invited to sit as delegates alongside both national delegates and representatives of renowned NGOs, and in attending, are given the chance to witness how decision and policy making works in an international environment. Through this, perhaps most importantly, students are enabled and encouraged to develop their understanding of current issues arising around the world.

I specifically chose to apply to a delegation to the United Nations Human Rights Council as, lacking the credits to choose optional law modules, I felt the scheme would allow me to further my study of the aspects of Human Rights Law covered in the first year Public Law module. I honestly didn’t anticipate being selected as applicants could apply from many countries across Europe, but was thrilled to hear that that myself and four other delegates from Romania, France, Greece and Austria had been chosen! As delegations are self-funded, with this one based in a notoriously expensive country, I was even luckier to subsequently receive funding from our very own Human Rights Law Centre, in order to be able to facilitate the trip. With the provisions to confirm travel arrangements, and time to peruse several concept notes of the key sessions, I made my way to Switzerland.

Eighteen hours later, after a taxing four hour wait at security, my group and I found ourselves amid the activities of the session’s second week. The group was given free rein to attend any event that piqued our interest, made easier by the variety of niche panel discussions and informal consultations taking place. As I had read some background materials of events to be held in the Council chamber itself, I managed to observe a Panel Discussion on the Role of Prevention in the Promotion and Protection of Human Rights. The Chair was none other than H.E. Mr. Baudelaire Ndong Ella, President of the Human Rights Council, with high profile panellists including Ms. Rita Izsák, Special Rapporteur on minority issues, and Ms. Sima Samar, Chairperson of the Afghan Independent Human Rights Commission. National ambassadors and stakeholder NGOs were given time to partake in the discussions, while I was given the chance to appreciate the intricacies of such an important interaction. Amongst others, I also observed discussions on the outcomes of Universal Periodic Reviews (UPR) for Albania and The Congo. These comprised presentations made by representatives for those countries under review, wherein they would establish the national stance on the recommendations made by compatriots to the Council. The floor was then open to other countries or stakeholders to praise or scrutinise their decisions during successive presentations. 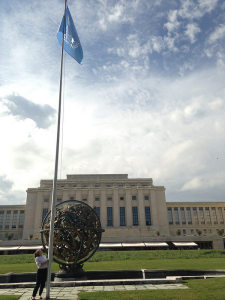 As well as these core sessions, the Palais des Nations housed a huge variety of discussions and side events which were centred upon prominent Human Rights issues. With my fellow delegates, I attended a number of informal consultations on resolutions, such as one on ensuring safety for journalists. Here, national ambassadors would express any opinions held on the articulation and body of the resolution in question. During these discussions, I was able to witness the procedural process of policy making and the administrative role of the Council of the United Nations.

Side events organised by NGOs on Human Rights issues were ongoing throughout the week, and seemed to centre predominantly on three key victims of modern Human Rights violations: Children, Journalists and Minorities. In the case of the former, I attended sessions entitled ‘Preventing the Sexualisation of Children’ and ‘the Rights of the Child in Syria’ which were very well structured. While I was familiar with some of the problems alluded to during the sessions, it was no less disturbing to learn that children are still the principle fatalities of war. Concerning journalists, there were a number of panel events highlighting the dangers of foreign journalism following the recent death of Steven Sotloff, such as ‘Defending Freedom of Expression and Information’. However, the most touching events to me personally were those which stood up for religious minorities, such as ‘Preventing Religious Violence in India’ and ‘Islamaphobia and Hate Crime’, as well as for LGBTI, persons who were frequently the majority of those suffering legal persecution in a UPR.

Since coming home, I have started to notice just how the experience has enhanced my understanding of Human Rights Law. It has also encouraged me to reconsider my route into the legal profession based on my preferences and skills. There are so many similar opportunities like this one that are open to law students if you just know where to look, and I could not recommend these schemes highly enough. I would like to end by extending a massive thank you again to the Human Rights Law Centre for their generous aid, without which I may not have even set foot in Geneva.