With the general election set to take place next year, the 2014 conference season was the last opportunity for Britain’s electoral parties to formulate a plan that will see them into the House of Commons with a majority. The conferences were essentially a litmus test for both party followers and the public. Advocate is here to take you through the key policies announced:

The biggest announcement from the Conservative leader, David Cameron, was a proposed tax cut that would reportedly benefit 30 million Britons. The Prime Minister said he would raise the tax-free allowance from the current level of £10,500 to £12,500 by 2020. This time frame also includes an increase in the 40p income tax rate threshold, which would be raised from £41,900 to £50,000 by the end of a five-year Conservative government.

The exact timing of when these proposals would be implemented would depend upon economic circumstances. Cameron said such changes to taxation were to support those who “do the right thing”. Under these proposals someone working 30-hours per week earning minimum wage would pay no income tax, and the increased income tax threshold would benefit roughly 800,000 people. The Institute for Fiscal Studies estimated that the combined cost of the tax changes would be £7.2 billion, from this we can infer that the Conservative leadership must be optimistic of the economic circumstances improving greatly over the next 6 years.

So a tax-cut for the highest and lowest earners. Tempted to vote Conservative yet? With a further £25 billion of cuts planned to public spending, the £7.2 billion cost of their tax proposals doesn’t look that expensive anymore, and British taxpayers will need their extra cash to cover the cost of reduced government spending on services, so will any of us actually be better off under a Cameron premiership?

Another proposal announced, that has since come under intense criticism, is the scrapping of the Human Rights Act and its replacement by the British Bill of Rights. The exact details of this proposal were not given during the conference, but a draft bill was promised to be revealed before Christmas, so expect some heavy news coverage (and controversy) while you battle your way through the high street queues. Very convenient timing for such a contentious policy!

The keystone of Labour’s conference was the NHS. As Blair did in 1997, Miliband is hoping to position his party as the protector of our beloved and sacred National Health Service (and hoping to replicate Labour’s 1997 electoral success no doubt). An extra £2.5 billion is to be pumped into the NHS, specifically on recruiting staff. While there is no doubt that a staff boost would aid our struggling health service, earlier this year a series of reports were published with the worrying news that by 2020/21 the NHS is facing a £30 billion funding shortfall. Suddenly £2.5 billion isn’t looking that impressive! This boost is still better than the Conservative pledge to protect the NHS from cuts, meaning spending levels would more or less remain at their current levels. Labour politicians claim that this extra funding would come from a new tax on tobacco companies, a ‘mansion’ tax, and clamping down on corporate tax avoidance. 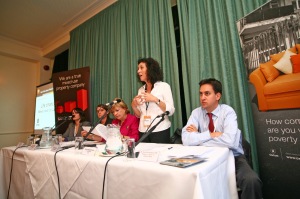 Unfortunately for Ed Miliband the most memorable part of his conference this year did not come from a vote winning announcement, but rather his own blunder which saw him (in a speech that lasted over an hour) forget to mention that all important deficit. Luckily the Shadow Chancellor Ed Balls was on hand to stake Labour’s position on the issue; he promised to see Britain’s budget into surplus and the national debt falling “as soon as possible in the next Parliament”. So no exact date but that was probably a wise move by the Shadow Chancellor, seeing as the Conservative-Liberal coalition’s set a goal of 2015 to balance the budget, which they will almost certainly be falling short of.

As mentioned earlier, a new ‘mansion’ tax was announced on properties worth over £2 million. Labour would also reintroduce the 50p tax rate for those earning £150,000+, and all government ministers would face a 5% pay cut (a loss of £7000 to the Prime Minister himself). On employment, a £8 national minimum wage was promised by 2020, a figure that is above the living wage (outside London at least).

Finally we turn our gaze to the depreciated Liberal Democrats and their leader Nick Clegg. With UKIP polling at almost 20% and the Liberal Democrats struggling to hit 10%, next year may see UKIP replace the Lib Dems as the ‘third’ party in Westminster, but for now we can continue to pretend Nigel Farage is just a nightmare and give column inches to Clegg, the lesser evil.

The Liberal Democrats promised to find an extra £1 billion annually for the NHS, amounting to £5 billion by 2020. That is better than the offer by the other two parties but still £25 billion less than the predicted funding gap. The money would come from a range of sources; scrapping some tax breaks, no winter fuel allowance or free TV license for wealthy pensioners, a 7% increase in capital gains tax, as well as adding higher council tax bands for properties worth over, you guessed it, £2 billion.

The party would also raise the level at which you start paying income tax, a policy they have championed, and have been quite successful in achieving, throughout the current coalition. They would increase it from £500 to £11,000 by April 2016, and increase it to £12,500 by 2020. The same proposal as the one proposed by Cameron and the Conservatives then…

So there you have it, a brief summary of what was said during the 2014 conference season by the three main Westminster parties (probably the last time the Liberal Democrats are included). Of course there were many more policies floated around by a variety of figures within each party, but I predict it will be these policies that will be the focal points during the impending general election, the policies that will attract enough voters to see a majority government in power next May.