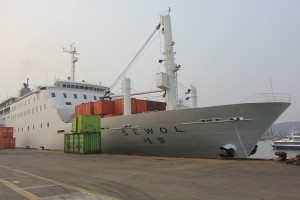 On the morning of the 16th of April, South Korea was struck by its worst ferry disaster since 1970. The MV Sewol was carrying 476 people, along with cargo worth approximately 200 billion Korean won, on its regular route from Incheon to Jeju. Most of the passengers were students from Danwon High School, enjoying a school field trip. As of now, 294 people have been confirmed dead, with 10 bodies still missing. Of the 29 crew members, 22 survived, including the captain, Lee Joon-seok.

The tragedy of the capsized MV Sewol has stirred considerable political and social outrage within South Korean society, concerning ferry regulators, government culpability, and most significantly, the altruistic actions of the ferry crew and captain.

After the incident, investigations revealed a number of problems with the ferry that had already existed prior to its fateful journey on April 16th. At the time of its purchase by the South Korean Chonghaejin Marine company in 2012, the MV Sewol was 18 years old. According to shipping experts, she ought to have been discarded, with the average lifespan of a ship at the time being only 15 years. Furthermore, after purchasing the ferry Chonghaejin Marine added 240 passenger cabins, resulting in a weight increase of 239 tons, and a subsequent imbalance of the ship. It was also discovered that the ferry’s license from the Korean Register of Shipping was based on falsified documents.

When the MV Sewol embarked on its final journey on April 16th, it was carrying more than double its legally permitted cargo load, and three times below the minimum amount of ballast water required to balance its cargo. These damning figures, when combined with an unusually sharp turn in the Maenggol Channel, proved disastrous. The ferry listed badly and began to capsize.

As the ship began to capsize, the captain and crew repeatedly instructed passengers, mostly consisting of high school students, to remain in their cabins. Despite the floodwaters entering their cabins, many passengers heeded the captain’s orders to stay put. Many of the survivors were passengers who left their cabins and attempted to escape, regardless of the orders they were given.

Controversially, the captain and the crew were among the first to be rescued. In South Korean law, it is explicitly stated that the captain of a ship is required to remain on board during a disaster. On October 27th, Captain Lee Joon-seok, along with three other crew members, was charged with homicide. The other 11 crew members face lesser charges such as criminal negligence and accidental homicide.

South Korean prosecutors sought the death penalty for Lee, which can only be carried out with a signed order from the President. Although death sentences have been issued in recent years, there have been no actual executions in South Korea since 1997. Amidst a courtroom filled with public animosity, Lee’s lawyers argued that there had been no intention to kill the passengers, and that the captain should not face blame exclusively. In a final statement, Lee apologised to the public, promising to “repent until the last day of [his] life.”

On 11th November, the court issued their verdict regarding Lee’s fate: the judges acquitted him on the homicide charge and the death penalty. Instead, they found him guilty of “gross negligence” and sentenced him to 36 years in prison.