As a city that enjoys considerable freedom, Hong Kong is no stranger to protests. However, the most recent protest in Hong Kong became a talking point across the world when the city’s police used unprecedented force to suppress protesters, leading to a furious escalation of events. The general message is clear: the crowd is fighting for democracy. Less clear however is the aim of the protesters, how the protests will end, and whether Hong Kong is ready for democracy now.

In 1997, Britain relinquished its colonial rule over Hong Kong and, pursuant to a joint declaration made in 1984 between China and Britain, handed the city over to China. Under the declaration, China was obliged to let Hong Kong retain the level of autonomy it had enjoyed under British rule. Thus, apart from foreign affairs and issues of defence, Hong Kong retained all decision-making powers related to its legal and economic systems under a principle known as “one country, two systems”.

The demand for democracy is broadly rooted in Hong Kong’s Basic Law, which is the city’s constitutional document. The Basic Law states that 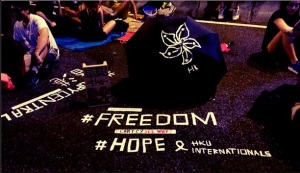 its ultimate aim is for Hong Kong’s leader, the Chief Executive, to be selected “by universal suffrage upon nomination by a broadly representative nominating committee in accordance with democratic procedures”. In 2007, China confirmed that Hong Kong’s Chief Executive could be democratically elected by Hong Kong citizens for the first time in 2017.

However, on 31 August 2014, China announced that in order to be a candidate for the Chief Executive election in 2017, one needed to secure more than half the votes of the nominating committee. This means that China would, in practice, retain significant control over who becomes the Chief Executive, depriving Hong Kong of the democratic process that it was promised. This, unsurprisingly, angered many citizens. Student groups boycotted lessons for a week, and on 28 September 2014, pro-democracy protesters made their way into Central, Hong Kong’s key business district.

The pro-democracy protests have been declared by both the Hong Kong and Beijing governments as illegal. Also, while there were plans by the Hong Kong government to hold talks with the protesters, they were recently called off.

The fight for democracy raises some important questions: are the protesters truly fighting for democracy, and is democracy truly desired by the people of Hong Kong?

Are the protesters truly fighting for democracy?

It is clear that the most immediate cause for protest is the desire for a genuinely democratic election process in 2017. However, some commentators have stressed the importance of the wider context, noting that the protests are not motivated solely by a desire for democracy, but perhaps also by a general discontent amongst citizens.

In the article ‘The umbrella revolution won’t give Hong Kong democracy. Protesters should stop calling for it’ published in The Washington Post, Eric Li, a venture capitalist and political scientist in Shanghai, argues that “general discontent has provided fertile soil for this movement”. Li noted that Hong Kong’s declining economic success, as a result of China’s prospering mainland market, has played a role in the growing resentment in Hong Kong. Additionally, Li highlights that problems such as increasing costs of living and the widening income gap have contributed to discontentment.

Arguably, China’s proposals for the election process only served as a trigger. The protests, while shaped as a demand for democracy, are perhaps a manifestation of the underlying, broader discontentment amongst Hong Kong’s citizens. 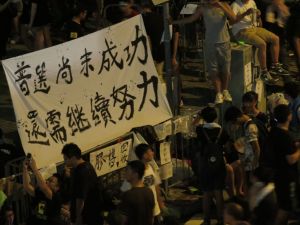 Is democracy desired by the people of Hong Kong?

It must be noted that the fight for democracy is not unilateral. Opposing the current protests are pro-Beijing activists, who believe that opposing the Beijing government would jeopardise Hong Kong’s economy and reputation. Such activists have subsequently organised protests against the pro-democracy groups.

Furthermore, the protests for democracy fluctuate week to week, as the public strive to balance a desire to protest with a desire for normalcy. Indeed, the reality of the situation is reflected by the results of a recent survey conducted by The University of Hong Kong: less than half of those surveyed felt that the China’s proposal regarding the election of the Chief Executive should be vetoed. While the pro-democracy groups are portrayed as the victors on social media, it seems the democratic movement has not necessarily garnered support from majority of the citizens of Hong Kong.

The enthusiasm, courage and resoluteness of the young protesters in Hong Kong is commendable, but whether their efforts will significantly influence the decisions of the Beijing government remains to be seen. The general consensus is that they will not achieve any tangible success.

Perhaps this would not be an undesirable outcome. While there are pertinent concerns of China barring genuine democracy for Hong Kong, the divided political views and aspirations of the citizens of Hong Kong do not make for a fertile ground for democracy at the present time.